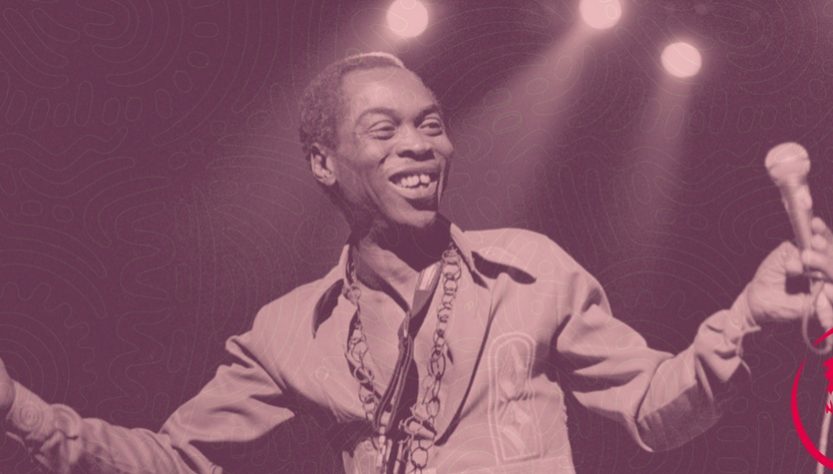 Fela KUTI or my own personal symbol!

In this our continent, when you talk about independence, freedom, fight against injustice or corruption, some few names rise top of mind: Lumumba, Nkrumah, Sankara, Biko or Mandela, etc, but often politicians.

Meanwhile, on the cultural side, in search of the same attributes, the same level of fights, the resilience, only ONE Name struck my mind: FELA! The man who used music as a weapon; FELA, the man who made former Nigerian president Olusegun Obasanjo, a symbol of corruption and shame all over Africa; FELA ANIKULAPO KUTI, the one and only BLACK PRESIDENT.

I have been thinking since weeks now on the right strings to pull, the right tale to tell, the tone to use…for this post on the one and only. In my quest, I used a gift, “FELA KUTI, Music Is the Weapon” Documentary directed by Stéphane TCHAL- GADJIEFF & Jean Jacques FLORI, published in 1982 (FKO Music) and released on DVD by Barclay, a label of Universal Music in 2002, a Must-See! 53 minutes dedicated to FELA, allowing him to tell his story in his own words, in his place, with his music, his special weapon. I am hereby sharing my take out.

FELA was born Fela Hildegart Ransome in 1938, in Abeokuta, Nigeria. His father Ransome-Kuti was a preacher and his mother Funmilayo Ransome-Kuti was a national activist, very engaged in the fight for independence of Nigeria (No Wonders).

Very early, Fela grew up in British manners, flying to London to pursue his studies at the age of 20. There, young Fela discovered HIS Africa and got familiar with the Black Americans civil rights fight. He did not stop at being familiar but indeed flew to the states for 10 months in 1969. He became familiar with the words from MALCOM X and the sounds of Empowerment, freedom for the Black People. FELA, our future king, the activist was now born! Return to NAIJA was not easy. As many others, he faced the Biafra War: cold, violent, dirty, and raw. FELA sang against this ignominy. In 1977, he dropped the-said-to-be slave name for one of a Yoruba King, and became FELA ANIKULAPO KUTI, king of the KALAKUTA Republic. In 1983, he longed for a presidential seat, even created a party, Movement Of the People (M.O.P). This ambition drove him hatred from the corrupted establishment in Nigeria. He became without a doubt a serious target. Brutality towards him and his family had no limit. His mother was thrown from a window, his wives raped, his sanctuary “Africa Shrine” was closed down and after a rough stay in prison, he was expelled from Nigeria a few months. From this battle, he lost his mother, who did not survive to her injuries. Still, against all odds, against expected common sense, he did not bend; he never compromised with government, and remained until his death in 1997, this fierce voice against oppression, this hero for many.

Watching the documentary, I definitely shed some tears (yes, I can be that kind of woman). I was touched by his courage, his so clear vision, his faith in his continent, his intelligence, his hard work and his uncompromising talent.

AFROBEAT, this rhythm that he created, is an exceptional miracle, only made of beauty, a hymn to the spirits. Close your eyes a few seconds and imagine: a Saxophone Solo, heavy African drums, charming women voices (often), and this beat that seems to go through your heart and follow its natural rhythm. « Unbelievable or poor description » you may think, which I admit. Still, we are discussing a heritage worth 60 albums, sonorities which have been appraised all around the world. Sonorities which have that special touch, that special something that reminds you of Africa each time you listen to them. Sonorities which leave you feeling massively proud to be part of the same continent than the genius named Fela Anikulapo Kuti, our one and only BLACK PRESIDENT.

AFROBEAT is also an uplifting rhythm, perfect war song, perfect to stand upon injustice and strongly used in that manner up to now.

Femi and Seun Kuti, natural heirs, give an impressive tribute to their father (the guy can be proud!). Meanwhile, they are not alone. Many did follow the lead and a special group has gained my massive respect. ANTIBALAS AFROBEAT ORCHESTRA is a band created in 1998 by Martin Perna for a total of eleven members, all Americans) and based in New-York. They are impressive, genuinely Africans in their sounds and relentless activists denouncing corruption and anti-democratic behaviors from around the world (Latin America, US) through their music.

All this stands as a proof that the King of KALAKUTA has defeated death just as he had predicted. His spirit is flying high and his groove has conquered the world. In the meantime, I hope I have got you craving to discover FELA ANIKULAPO KUTI and his descendants.

Your Feedback, suggestions or experience are most expected and most welcomed.

Some nice introduction below