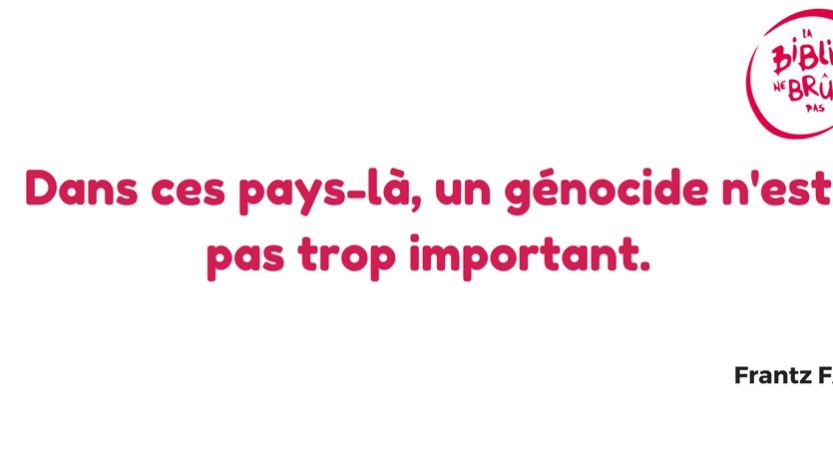 François Mitterand has been president of the French Republic during decades and has now passed away. The above saying is related to the Rwandan Genocide and suggests that in Africa, a genocide is no big deal!  With its thousands of deaths in just one month, it was a nightmare which fell on a blessed land. France Government participation to this ethnic conflict has always been considered very disturbing. Support to the Hutu government leading the genocide, before and after has been kind of demonstrated (with all due respect to the French People). Moreover, it is also generally admitted that all the big nations stayed quite silent and inactive in face of this horror.

Meanwhile, I am not stroked by the link to the genocide in this saying. I am rather feeling enraged by this brutal demonstration of basic racism. Black people through the centuries have often be assimilated to savages, mere beasts that needed control and attention. This thought often linked with the noble thought of « inspiring civilization » has been the basis for a so-called- white race superiority.
Black is beautiful, Black is bold. Africa is a land which has inspired the world. Africa is the mother of humanity. Africa is about friendship, support, respect of the elderly, passion. This is what we stand for. Wars are also part of our history but where in the world has it not been the case? In the past centuries, Europe has recorded a number of outrageous and devastating wars. Still, this continent does not seem to be considered as a symbol of Barbary as a whole.

Rwandan Genocide was twenty years ago. When I think about it , my heart bleeds, as if a member of my close family had died there. During this month of April, have a thought for all the families who died in Rwanda. This is not an horror we want repeated in any country being it in Africa or elsewhere in the world.

More importantly, as a person from the Black race wherever you live around the world, never tolerate anyone to cast you as being part of a barbarian lot just because you are Black. Black is B! In God we Trust. As for my fellow human beings mate, racism against any race or group is a felony to be fought against and I hope you are aligned with me.